Canada, Sep 21 : The Indian Christian Community of Canada and their supporters came out in large numbers to show solidarity with their Christian brethren in India, who were the victims of the recent horrific attack on the churches, places of worship, innocent Christians, nuns and the clergy. An estimated 500 people were gathered in the Square of City Hall on Sept. 20th 2008 at 9:30 am. This protest was well covered by the local media.

This was the largest gathering of this nature by Christians out side India, in the light of the events that took place. The protest rally was graced by priests & clergy from the various Christian denominations. It was heartening to see the commitment and zeal of the young & old who showed up with strong messages on the placards and banners. 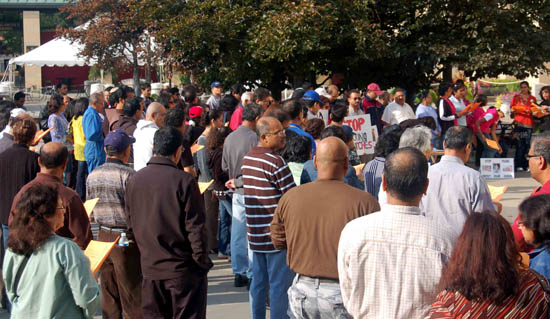 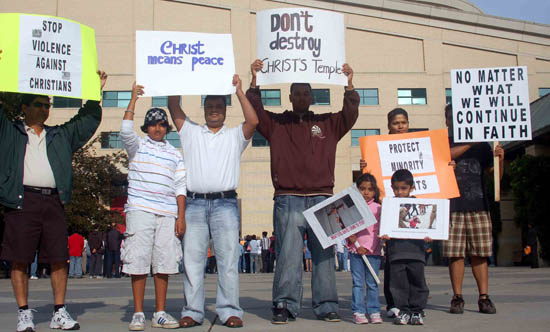 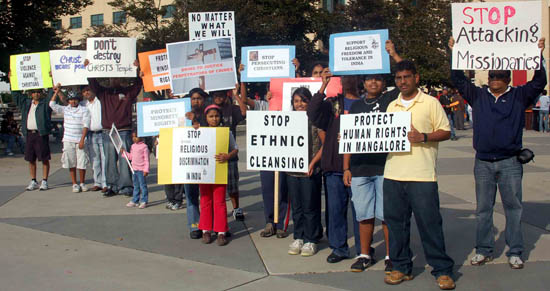 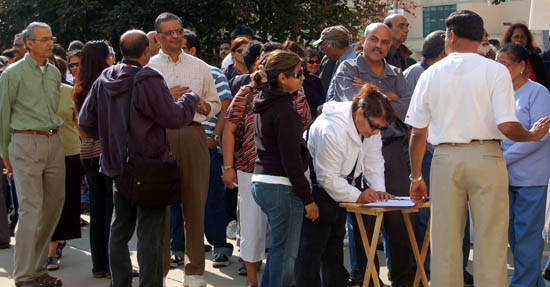 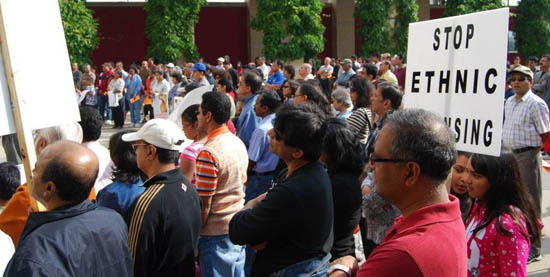 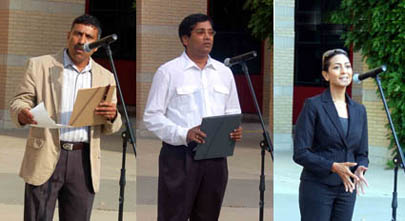 Hundreds signed petitions addressed to: The High Commissioner of India: demanding that the Government of India take immediate action to protect minorities, the Prime Minister of Canada: requesting the Canadian government to investigate the Human rights violations perpetrated by Bajrang Dal and its leaders and deem them a Terrorist Organization and to The High Commissioner -International Human Rights Commission-Switzerland : To charge the leaders of Bajrang Dal in the International court of Justice for inciting hatred and violence against the Christian minorities and investigate the inactions by the Chief Ministers of Karnataka, Kerala & Orissa and other affected states, in protecting its citizens.

Rev. Fr. Joe Mary Lobo started the proceedings and called upon every Indo Canadian to promote peace and pray for justice. He further reiterated that for the most part Hindus and Christians live peacefully, Hindus are peace loving people. It is only a tiny minority that are responsible for this shameful act.

Fr. Henry Alva, a well known Franciscan friar was very candid about the incident and called it not just an isolated incident or an accident, but it is a systematic planned project that is executed by the Bajarangdal and supported by some insensible political leaders. He called the attack shameful as Christians have only done good to the nation by their selfless acts of love and offering good education and health care. His message was of peace and forgiveness. Imploring to Indo Canadians he asked them never to disrespect their mother nation and never to lose hope as there are some great people in India, who promote peace and justice.

Dwayne Menezes a youth activist from London, U.K., recalled in his speech several horrific crimes committed against the innocent Christians and called for hope among the Christians to face persecution with courage, following the example of Christ. Several other great speakers including, Melissa Bhagat -Conservative candidate from Mississauga, Fr. Austin another Franciscan Friar, Mr. George Matthew from the local Brethren Church were united in their call to people to promote peace, tolerance and respect for all religions.

Max Mendes, the chairman of Canara World Foundation Inc., in his speech capturing the highlights of the protest said that it is not the entire Hindu community who is responsible for this but the fundamentalist fanatics of Bajrang Dal behind these attacks, well supported by a few ignorant and self promoting politicians, looking to communalise before central election. He also sent a message across to the Indian Christian brethren that although we are living in a distant land, yet we have strong roots in India and that we do Care. And will use all the diplomatic channels to bring these atrocities and human right violations to the light for the entire world to know. He thanked www.daijiworld.com and & www.mangalorean.com for up to date coverage when national media ignored at the beginning. He also commended the protestors for coming together on this day in such a large number within a short notice.

Donald Alva, a prominent community leader and one of the organizers conducted the proceedings of the protest in an orderly fashion. He reminded the people to remain peaceful as they always are, but stay in solidarity with the brethren in India who are victimized for their faith. In his introductory speech he described this senseless attack as not only crime against Christianity but humanity in general.

Gerry D'Mello one of the community leaders and organizers led the choir, making the protest a true Christian rally by signing hymns of unity & peace.