Moodbidri, Dec 19, 2005 : After the successful show "Wilfy Nite Canada - 2005" at the Living Art Center of Mississauga, Toronto, on Sunday, October 30 and creating a history in North America, Max Mendes Group organized another show in Moodbdiri in support of Sri Christa Sharan Ashram for their evangelization work in Birur, Chikmagalur district.

The audience exceeding approximately 1500 enjoyed every minute of the show. Over the years, Wilfy Rebimbus & his troupe have developed a new style of entertaining every generation with modern songs , lovely dance & emotional songs. The 'Maria' song sung by Vishwas Rebimbus & 'Mog Tuzo Kitho Ashelom' by Wilfy were great hits along with 'Davngo Chedva' , 'Ful Fula' combined with the jokes by Dolla & Co. 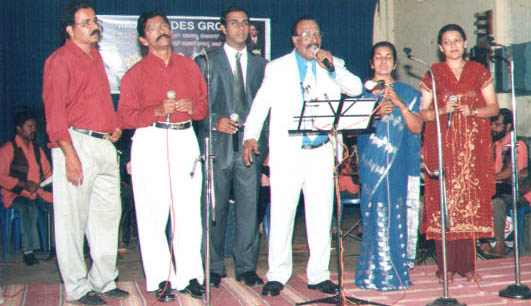 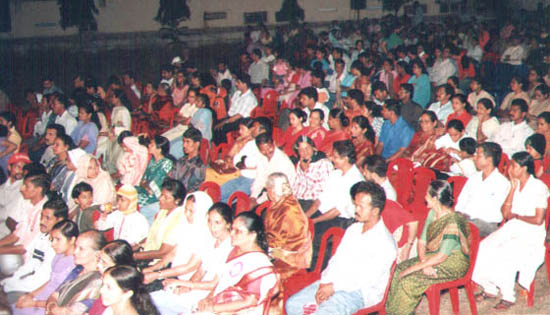 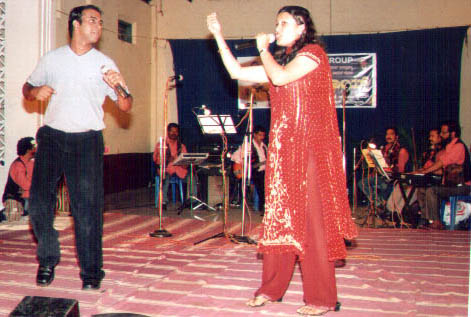 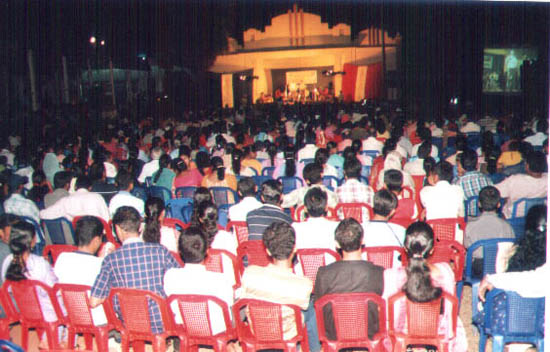 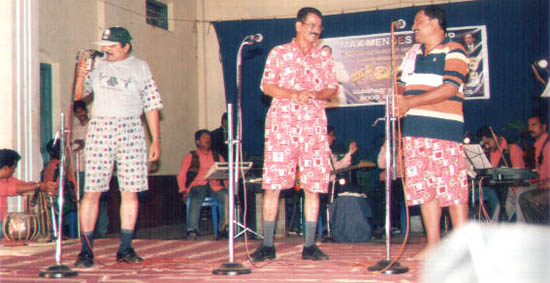 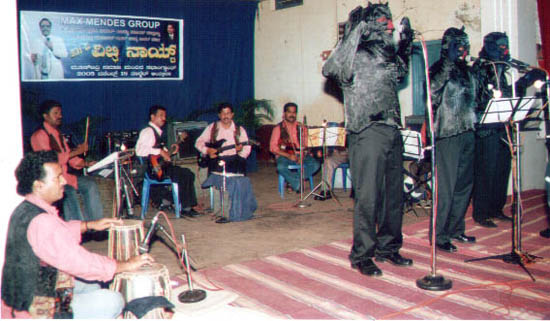 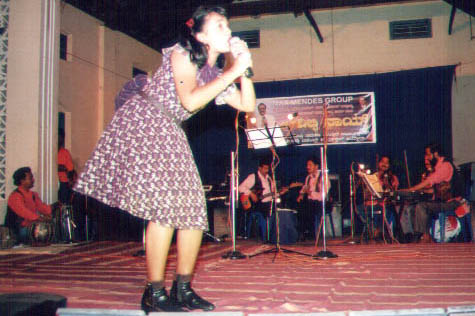 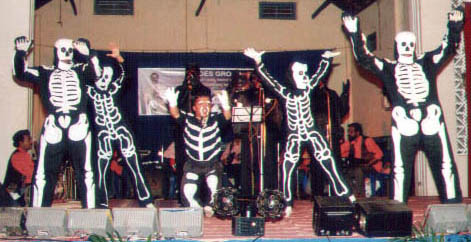 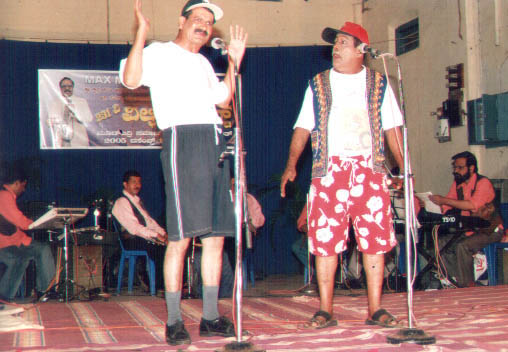 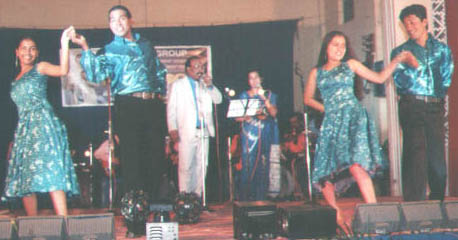 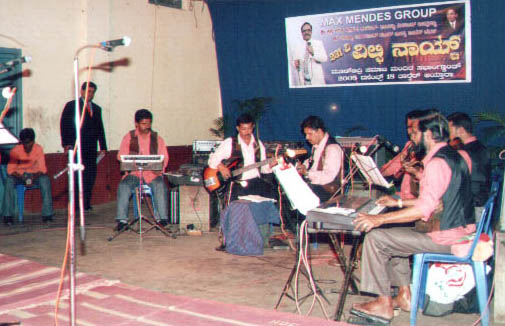 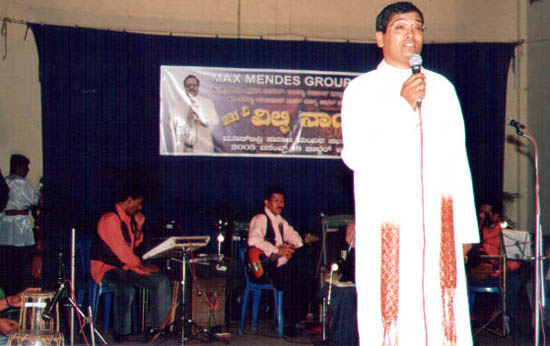 It was very heartening to see more than 50% of the audience were less than 30 years of age which shows the interest of younger generation in Konkani music & the culture. There were more than twelve priests of Moodbdiri Varado & from Mangalore Diocese and several religious sisters who attended the function and graced the occasion.

The fascinating show commenced at 6.15 PM at the Samaj Mandir Hall, Moodbidri with the melodious song, "Madhur Sangith Valtha..." by Wilfy, Meena, Vishwas, Sandria, Prem and Claude added the touch of a warm start and the eagerly waiting 1500 plus music lovers listened to the "Konkan Kogul" , Wify Rebimbus and his wife Meena, the "Konkan Maina" with great enthusiasm. Undoubtedly the focus of all attention was none other than the legend of Konkani music who has not only the charisma to enthrall the audience but also the magic in his voice that mesmerizes young and old alike.

Soon the flurry of Konkani music spread all around the corner with beautiful solo 'Sonia' by Wilfred Moras and the dancing duet 'Ye Chedva' by Vishwas & Sandria.

The heart breaking song 'Divorce' by Wilfy Rebimbus brought tears from the eyes of audience, whereas the charming song "Ko Ko Kore" of Esta Noronha with a beautiful hen dance was eye-catching. The jolly-good 'Maja Mar' by Vishwas, Prem & Claude was the last song of session one.

All the songs were simply superb and the entire gathering was enjoying the meaningful lyrics accompanied by the electrifying music by the duo Pappan & Joswin. Dashing dance performance by Deepak D'Souza & troupe added extra flavour to the tempo of the songs.

Fr. Joe Mary Lobo of Sri Christa Sharan Ashram, in favour of which the show was organized, narrated the missionary services carried out by the Ashram and the sisters sang hymns to the Glory of our Lord. Fr. Joe Mary felicitated the Moodbidri Varado priests, sponsors and well wishers for their tremendous contribution to this successful show.

The session two commenced with "Denvcharachi Lodin" by Prem, Claude and Vishwas. The artistes with their horrifying costume gave the real picture of the working of a Satans mind among Konkani People. 'Alli Milli Yeyago' by Estha took the crowd to the teenage life. The duet 'Ful Fula Tum Ful' by Vishwas & Sandria made the audience float in the romantic world. The humorous 'Ladies Tailor' by Prem & Claud focused on the naked truth of todays gimics whereas the 'Dhanv Dhanv' by Sandria & Arona was a warning to the girls. The jolly good "SaSaSaRe" by Prem & Claude accompanied by beautiful dance made the crowd to dance in their own seats.

Then came Vishwas with 'Maria' followed by the 'Konkan Kogul' with the fantastic number 'Mog Tuzo Kitlo Ashelom', arguably one of the greatest, evergreen Konkani hits, which indeed brought back the memories of the yesteryear.

The event concluded at 9.45 PM with again "Madhur Sangith Valtha..." by Wilfy, Meena & troupe with the special message of Happy Christmas was able to boost the Christmas spirit of the crowd.

The comedy skits by comedy king Dolla, accompanied by Kulla (Sanjeeth) and the comedy trio 'Me-Mo-Ri', Mellu, Moras,Richa, Rita and Mousami in their own style and costumes, provided hilarious laughter to the audience.

The master compere Leslie Rego from Mangalore compered the event with his usual humor and stylish dialogue delivery.

In his thanking note, Max Mendes promised to continue the support to Konkani cause here in Mangalore as well as in Canada. He appreciated the entire audience of 1500 people, priests, ICYM members, who supported him as well as the show, which was arranged within a short notice of just 15 days. Max Mendes said, " I am proud to be part of you as a Taccode - Moodbidri boy. I share the same love for Konkani like each one of you".

He thanked father Joe Mary Lobo, who is doing service to the most downtrodden section of society and passing the message of Christ through his love , service & dedication. Max Mendes recognized the support of the sponsors who contributed tremendously toward the event and ensured its success. He offered his deepest appreciation to all the media persons for their involvement and motivation in ensuring widespread publicity for the event. Mendes made special mention of the numerous volunteers who generously offered assistance, time and energies to the great show.

The sponsors of the events are listed below.